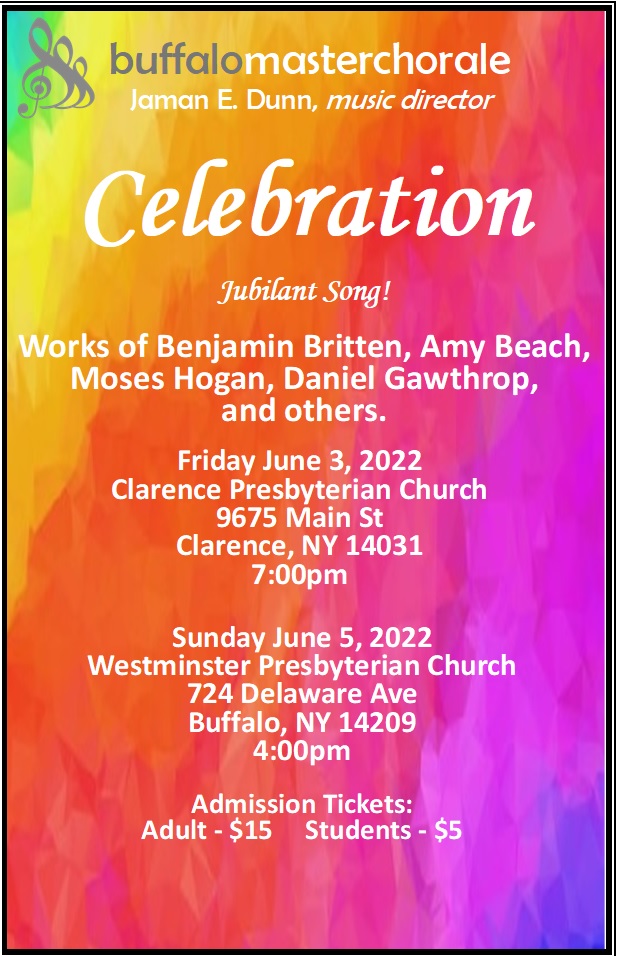 The final concert of the Buffalo Master Chorale season is entitled Celebrations: A Jubilant Song!

This concert reflects on music written for different types of celebrations.

The pieces entitled Listen to a Jubilant Song, and Sing a Mighty Song concern themselves with the acknowledgment of singing to denote celebration. Within these works, joy, satisfaction, and ease are adjectives used to describe the concept of singing.

The next two pieces are taken from the spiritual tradition, God’s Gonna Set This World On Fire, and Ain’t That Good News. The spiritual tradition hearkens back to a time when most African-Americans were enslaved. Many spirituals took text that emphasized the ending of captivity, or the world as they knew it. The phrase “go home to my Jesus” may seem morbid to some, as it references death rather explicitly, but remember to those who sang, it was a promise that slavery, pain, sorrow, and even death itself would be over.

The second half of our brief concert is given to the Anglican tradition of Matins, or Morning Prayer. In the Anglican tradition, scripture readings at Matins are surrounded by choral selections of the Te Deum and Jubilate. We have selected specific versions of both. The Festival Te Deum was written for the centenary of St. Mark’s, Swindon, which is located in Wiltshire, England. The piece premiered there in 1945. The Festival Jubilate being performed was written for the dedication of the Women’s Building at the 1893 World’s Fair in Chicago, IL. This is notable, as the piece is written by a female composer, the building was dedicated to the achievements of women, it housed many achievements of women from all over the world, and the building’s architect was also a woman. For such a wonderful thing to be in existence in 1893 is a feat indeed. Remember, at this point in history the right to vote for women had not been enshrined in the U.S. Constitution. That would come about 25 years later.

We also celebrate the ability to come together in song, the ability for you to attend our concerts, and the presence of this wonderful music.

Registrations are closed for this event